March 11, 2012 – I LOVE the latest WordPress feature that rolled out on Friday. It let’s you know what country the visitors to your blog are from, and let me just say that when I checked my stats, I was amazed. People from 47 different countries visited my blog over the last three months, two from countries I’ve never even heard of (which doesn’t make me proud to admit). It truly makes the world feel like a more intimate and friendly place.

For all you bloggers out there who missed the announcement, go to your “My Stats” tab on the WordPress.com homepage and look for the new “Views by Country” panel. 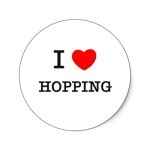 March 9, 2012 – It was almost 70 degrees in Philadelphia yesterday, which prompted the desire to dine alfresco. I headed to the food cart with a friend, and walked across the street to enjoy the meal in Washington Square Park.

On the grass facing Walnut Street, I observed something so odd that I cursed myself for not having a camera or cell phone with me to capture the moment. A handful of people, who didn’t appear to be together or even know each other, were hopping across the grass.

I was mesmerized. Were these well-dressed adults playing hopscotch, I wondered, or were they trying to get in touch with their inner child, back before they crossed into awkwardness and started to care about what people thought?

For all I know, this could be an odd new social trend. I’m usually not hip (or hop) to these trends until they’re on the way out. I just recently discovered planking, or lying face down in an unusual location with your hands at your sides in public.

As if that wasn’t enough, something even stranger happened next. A huge gust of wind blew through the park causing most of the people to head for the shelter. We finished our lunch in the lobby of our building and chatted a bit before heading back to work. When I glanced out the lobby window, which overlooks Independence Mall Park, I saw people in the distance doing the same thing, two blocks away from the original hoppers.

Are people in Philadelphia going crazy? Or are they just hopping on the latest fad wagon? I Googled “social trends hopping” and all I got was results for “social trends shopping”.

Does anyone out there know what’s going on?

March 8, 2012 – Spring is on its way, which means that college graduations are close behind.

While the job market is expected to be a little better than it was over the last few years, here are 10 jobs graduates may want to avoid applying for since they are ranked as the hardest jobs in America to land, according to the Bureau of Labor and Statistics and collegetimes.us.

March 7, 2012 – Residents living in the southeastern Pennsylvania area, who go “down the shore” (area speak for vacationing at one of the beach towns in southern New Jersey) are probably aware of the friendly, yet competitive pizza wars on the boardwalks.

In Ocean City, N.J., for example, the battle for best pizza was once fought between Mack and Manco and Prep’s. The clear winner judging by the long lines that formed outside of its three boardwalk shops was always Mack and Manco.

Mack’s and Mack and Manco actually create the same famous thin crispy pizza vacationers have come to love. Tony Mack and Frank Manco, the ones who started it all, are first cousins. The Mack family opened Mack’s Pizza in 1953 on Wildwood’s Boardwalk, and partnered up with the Manco family in 1956 to open Mack and Manco in Ocean City.

Those pizza wars have taken a drastic turn, kicking aside their competitors’, Sam’s and Prep’s to battle it out with each other in an action that has the Mack and Manco families are acting more like the Hatfield’s and McCoy’s. A few months ago the Philadelphia Inquirer reported that the name “Mack was officially dropped from a moniker that has been around since 1956, and the pizza shops are now called simply Manco and Manco.”

According to Chuck Bangle, who co-owns the pizza chain with his wife Mary and her parents Frank and Kay Manco, the two entities decided to go their separate ways. No one knows – or at least no one will talk about whether the split was amicable, but Mack’s will continue to be a favorite on the Wildwood boardwalk, while in Ocean City, Manco and Manco will continue to rule.

Would there be a change in flavor or in recipe with Manco and Manco Pizza? I did a little investigative work over the weekend to find out. My plan was to have lunch in Wildwood, and dinner in Ocean City, and compare the two. Unfortunately, Mack’s in Wildwood was still closed for the season, so I made the best of my time and wandered about the eerily empty streets taking in the famous art deco landmarks that made Wildwood famous.

When I reached Ocean City, I was met by crowds on the boardwalk, and inside the 9th Street location of Manco and Manco, which is open year round.

I’m happy to report that Manco and Manco the pizza tasted the same – not that I really doubted it would. They’d be crazy to mess with a famous and popular recipe. I tried to pry information from the men behind the counters about what really happened in the pizza feud, but like good employees, they stuck to the script and told me the families simply decided to go out on their own.

One thing was for certain. The diners in the shop didn’t seem worried about the name change. Every table was taken, and the lunch counter was practically full. I found several groups like me who drove in from Philadelphia just to have a late lunch. After I left, I walked the boards before heading home.

The moral of this story is that a name change doesn’t always affect the quality of a product. Mack’s will continue to be enjoyed by the folks visiting Wildwood, and Manco and Manco will feed those who flock to Ocean City. It’s just sad the pizza wars that were once friendly competitions between vendors happened from within, and probably broke up a family.

March 5, 2012 – The Philadelphia Museum of Art is world-renowned, yet often taken for granted by local residents.

But they’re coming out in droves to see the paintings of Vincent Van Gogh in an up close and personal exhibition, the only American stop on a groundbreaking tour that focuses on the artist’s final two years, 1889 and 1890. This was a time of great turbulence for Van Gogh, who spent most of it in an asylum, and also great production, with him at one point completing 90 paintings in 90 days.

In all Van Gogh painted almost 900 paintings between 1881 and 1890, yet he never sold a painting unless you count his brother, Theo, who he knew his brother Vincent was creating something special, and ahead of his time.

The exhibit runs through May 6, and features about 30 paintings from this period. Some of his most famous works in the exhibit include: 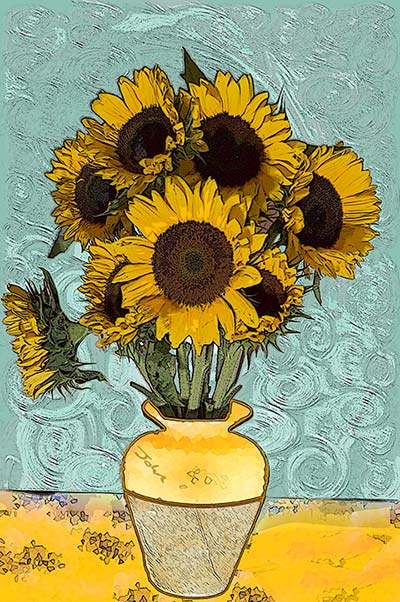 Van Gogh painted a series of Sunflower canvasses, four in all. The one on display at the Philadelphia Museum of Art was painted in 1889. All four are similar in style, and only differ slightly in color. 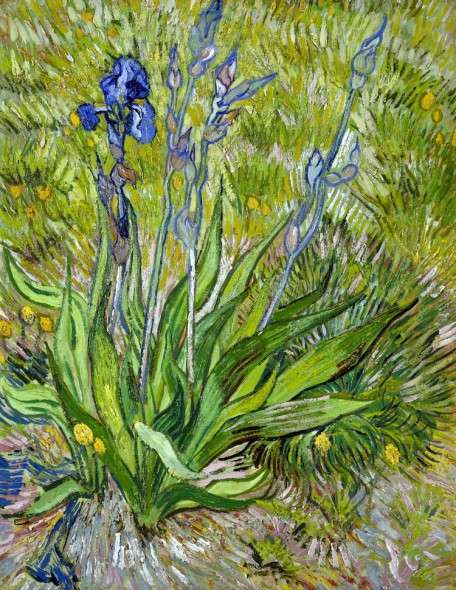 Our tour guide explained that in his early works, Van Gogh’s paintings featured symmetrical objects, with an equal balance throughout the canvass. In his Iris and many other paintings of that era, Van Gogh used techniques he perfected in Paris, and that were also common with Japanese art commonly known as the “S” shape. The eye focuses on the upper right hand side of the painting at first glance, and brings you around the painting in the shape of an S. 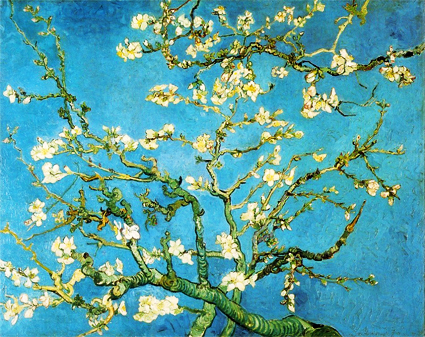 Van Gogh’s interest in Japanese art is prominent in his painting Cherry Blossom. He painted it as a gift for his nephew, also named Vincent. The painting still belongs to the Van Gogh family, and was loaned to the exhibit by the Van Gogh Museum in Amsterdam.

Many attendees were disappointed that A Starry Night wasn’t displayed; however, it is close by, at the Museum of Modern Art in New York, where it is on permanent display.

In a 900-page book entitled “Van Gogh: The Life” released in Oct. 2011, authors Steven Naifeh and Gregory White Smith claim that Van Gogh didn’t actually commit suicide. Rather, they write, a teenage boy accidentally shot Van Gogh, and the artist claimed he shot himself to protect the boy.

We paid $15 more than the $25 ticket price for a private tour early Sunday morning before the museum opened to the general public, and it was well worth it. The crowds have been massive for this exhibit, and were lining up around the building as we left. With the private tour, we were permitted to spend as much time in the exhibit as we wished, but only 22 people were granted entry with each tour – until the museum opened.

No photos were permitted inside the exhibit hall, but I managed to snap a few before we entered. 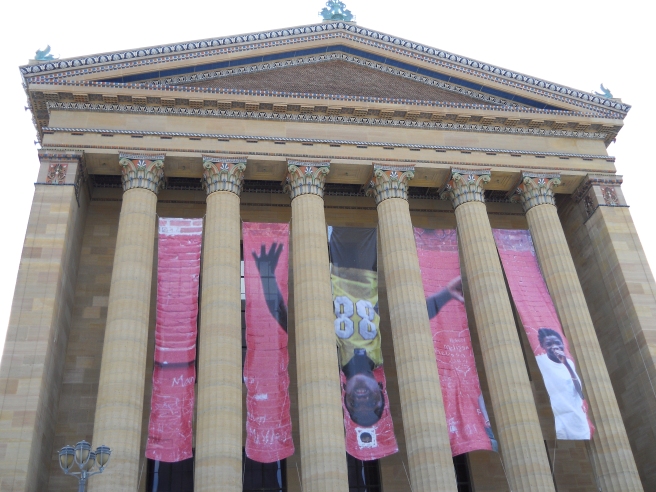 The back entrance to the Philadelphia Museum of Art 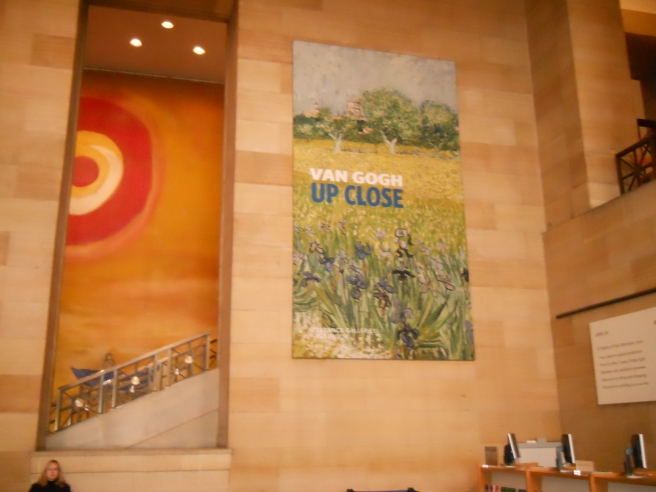 Outside of the exhibit hall 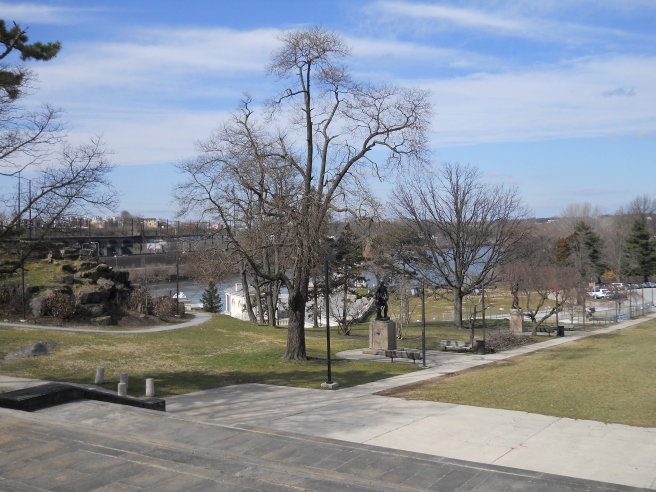 The grounds surrounding the museum, over looking Philadelphia and the Schuylkill River

If you live in the Philadelphia area, or are planning a visit before May 6, Van Gogh Up Close is a must see. I’m definitely not an art expert, I just know what I like, and seeing the actual paintings up close and personal, the texture of the paint and brush strokes, and the colors used (blues were definitely my favorite), was like a little piece of heaven in Philadelphia. 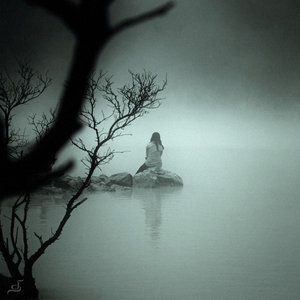 I drove to work without music, sports talk, or the slightest whisper from a radio station, mp3 or CD playing inside my car.

Unexpectedly it happened because my battery light came on as I was driving onto I-95. I managed to pull over and quickly restart, but fearing it would happen again, I pulled back on the road only after turning the radio off.

I drove on surrounded by the sounds of silence, something that is so very foreign to me. I can’t say I enjoyed it because I worried about my battery dying, but the silence continued on my way home that night, and for the next two days – not just because I was afraid, but because it started to grow on me.

During those silent drives, I sat alone with my thoughts, able to ignore the sounds of the highway outside my window. Soon I began to figure things out. I had a writing class coming up that Saturday, and was still stuck on how to handle my assignment, but by the time I got home on day two of my self-induced silent treatment, I had it written in my head and I knew exactly what to do. The same held true for a project at work that had me stumped.

The silence also made me ultra aware of what is going on around me and has affected me in other places outside of my car; the clock in work that sits above my desk, for instance, began to drive me crazy. Oddly, I can hear it tick now and had to turn on music to drown it out.

It works both ways, I suppose, and it’s nice to have the option.

I’m back to driving to work listening to sports talk and driving home with music, at least most of the time, but I promise that one or two days a week, I’ll go it alone with just the silence for company.

There is something to be said for being alone with your thoughts.

As long as there isn’t an annoying clock ticking in the background.