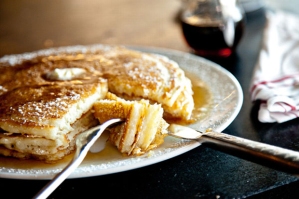 Jenny walked along the streets with the tune to “Jennifer Juniper” bouncing in her head. Her father used to sing it to her when she was a little girl, and it always made her happy. She hummed the Donovan tune gleefully, an odd occurrence considering she was about to attend another brunch at her mother’s house. She was in a fine mood despite it, even though she had to face the repercussions of last week’s drama. She considered skipping this week, but she wanted to prove her strength. If there were problems, and there usually were, they would take a week to pass and the next brunch resumed as if nothing had ever occurred anyway.

Even so, it surprised Jenny that her mother did not call. It troubled her a little, actually, given that her shop had been in the news all week because of the winning lottery ticket. Surely, her mother had to know. Wouldn’t she want to gloat that Jenny’s fortune was a direct result of her suggestion to add a lottery machine?

Just thinking about Mr. Hiller’s winning lottery ticket made her smile. Yet, he was so secretive a few mornings before after Charlotte made her exit from the store. He teased her by saying he knew what to do with his lottery winnings, and then told her that in time, he’d fill her in on the details, after they were worked out, of course. Mr. Hiller had mentioned that he overheard Charlotte and Jenny speaking about the DIH, so she just assumed it had something to do with the club. But maybe she was wrong, and it had nothing to do with it at all. Everything didn’t evolve around the DIH.

Though the calendar had turned to spring, the day felt cold, like winter’s last hurrah, and the overcast skies had threatened rain. The weather hadn’t stopped the few people with lawns from hiring services to get their grass ready for the showing season. With pampered lawns across the city the putrid smell of gasoline in mowers would fill the air, and as much as she loved the summer, she hated that.

When she reached the town home, she took a deep breath and rang the bell. No avoiding it any longer, she thought. Her stepsister Emma answered the door with a grin.

“Jenny, come in. We’re all in the dining room.” As usual, Emma wore pink cashmere and flannel slacks with pearls, and she figured her twin dressed in similar fashion. Nevertheless, when she reached the dining room she noticed the banner on the wall that shouted “congratulations!”

Jeesh, another celebration. What was it for this time? A hole in one at the country club? Before she could ask about it, the group shouted “Surprise” and showered her with the cheers. Shocked, she couldn’t help but smile. It seemed like overkill and it was probably insincere, but it was a creative way to apologize and it put her at ease.

“What are we celebrating?” she asked.

“The lottery,” her mother shouted. “What else?”

“Jennifer, whatever do you mean?” Her mother frowned.

Henry laughed. “Ah, the short story by Shirley Jackson,” he said. “It’s a rather clever comparison.” He turned his attention towards his wife. “In that story winning the lottery meant death by stoning.”

“Good heavens,” her mother said. “Why would you think that?”

“Quite academic of you, Jenny,” Henry said, for a moment reminding her of Mr. Hiller, and making her like him a bit.

“All jokes aside, we know you didn’t win the big jackpot, but we’re happy for your friend,” her mother said, avoiding his name. “And we’re thrilled for you that your shop is entitled to a bonus.”

“Not to mention the publicity your little shop will get from this,” Henry added. “You can’t pay enough to get good press, you know. It’s extremely valuable.”

Jenny nodded, trying to ignore Henry referring to her shop as little. “I guess the store has been busier than usual,” she said, “but most of my clients don’t even know there is a lottery machine inside.”

“You’d have to be living under a rock to have missed the local buzz,” Sara said. “It’s been all over the papers and the news stations.”

“But we haven’t seen any pictures of you in the paper or on the news,” Emma replied.

“The quoted me a few times in stories, but I declined to be on camera,” Jenny admitted. “I know it wasn’t a lot of money that changed hands on my part, but I wanted to keep some privacy.”

“Good for you,” said one of the fiancés, and she was not sure which one, but she thought it might be Robbie. “Don’t want those blood hounds at your front step.”

“You’ve always been a level headed girl,” her mother said. “We could always count on you to make the educated decision. Now, who wants brunch?”

Her mother had made all of her fattening favorites, French toast with butter and powdered sugar, pancakes, cherry cheese Danish and croissants and blueberry jam.

“Carb city,” Emma commented as she sat down at the dining table.

“Don’t worry,” her mother said. “Next week it’s back to eggs and lower carb fare. This is a special occasion.”

As Jenny loaded her plate with brunch goodies, happy for the first time in a long time that her mother’s focus remained on her and what she liked, she noticed everyone else, including the men only nibbled on the goodies. What a bunch of wimps they were.

“I hope you know that we’re all sorry we insinuated you were in a relationship with that older English gentleman,” Emma said. “I’m sorry you got angry and left.”

Jenny took a deep breath and tried not to lose her temper while her mother watch her for a reaction. Her stepsister did not apologize for her behavior, but rather danced around the topic. Let it go, Jenny, she whispered to herself. Some things were better that way.

“I wouldn’t say she was angry, Emma,” her mother said. “Maybe a little sensitive, but angry, no.”

“Oh, no anger is a good way to describe it,” Jenny said, “I’m also appreciative that you apologized because he’s a good friend and you seemed to be making a mockery of that.”

“We didn’t mean to do that, dear,” her mother said. “I still think you should apologize for leaving so abruptly.”

Jenny looked at her mother’s face. “I will apologize for overacting, mother, but I had every right to leave.” She smiled with much satisfaction. That was her way of retaliating her stepsister’s apology. Say enough to make it seem like you are sincere, but not overdo it. Jenny could play this game, too. Just saying it felt insincere and took her back to a time in childhood when her parents had a particularly horrible argument.

“Let’s not play this game again.” Her mother shouted those words to her father, who stayed silent during arguments prompting her mother to say she always argued with herself.

“I want to play a game,” she said with a six year old’s innocence. Only now did she realize that these were not children’s games, but mind games that adults played. She had never seen her father so angry before, and although she remembered the incident several times over the years, she never had the courage to ask him about it. Now was not the time to ask her mother, either. Not in front of all of these people.

Through the years, she wondered if it had anything o do with the mysterious paperwork she found one night in his office drawer. She was looking for a pen to do her homework, but instead she found an envelope marked Mr. and Mrs. Hobbs, 1959. Even as a child, the dates didn’t add up. Jenny was born in 1972, and her parents had not married until 1969, ten years later. Perhaps it was simply a typo. She unclipped the small manila envelope and opened it. Inside there was a copy of a signed certificate, along with a photo that was her father, but the woman next to him, who was tall with jet-black hair, was not her mother. She wracked her brain trying to figure out the answer to this sudden riddle, but there was no way around it. Her father was married before, and to someone who was not her mother. The mere thought sent shockwaves through her, yet she never had the guts to ask either parent if her suspicions were correct.

Over the years, there were other signs that pointed to a first wife. The strange phone call from a woman that upset her mother when she was about 15, and overhearing her father trying to console her that it was a part of his past, and he couldn’t do anything about it now. Then there was the time when she had been shopping with her mother and they ran into a lovely woman at the mall, who looked like the one in the photo. The woman said hello, clutched two young children by the hand, yet seemed to make a big fuss over Jenny anyway, as her mother asked her to leave them alone. Jenny never heard her mother speak like that to anyone. At one point, Jenny thought that this woman might even be her mother, which might explain a lot, but that was not possible. She had the same shaped hands and fingernails as her mother. Everyone had said so. Other than their identical hands, Jenny’s appearance came from her father’s side of the family. It was difficult for her to believe her father would keep such a secret. Jenny couldn’t help but wonder what split them up. She never had the courage to bring it up to either of her parents. She kept telling herself that it did not affect her. Nevertheless, it did affect someone she loved, and that gave her the right to want to know, but not the courage to ask.

“I wasn’t trying to play a game, Mother,” Jenny said. “I wanted to explain why I reacted the way I did last week.”

“That’s seems fair,” Henry said, and her mother nodded in agreement doing anything she could to avoid another quick departure from Jenny. It was amazing that she felt she had the power right now. That almost never happened, since she was powerless in her mother’s presence. The woman knew how to use guilt to control her daughter like the best of them. “Now let’s enjoy this decadent brunch before it gets too cold,” Henry added. “And while we do, maybe the girls would like to fill Jenny in on the bachelorette party plans.”

15 thoughts on “Daughters of the Hall – Chapter Nineteen”