The popular word game that ripped off Scrabble disappeared in my circles, and I can’t say that I miss it. Scrabble is the original game that holds my loyalty and has stood the test of time.

Other classic word games not likely to disappear soon include crossword puzzles and cryptograms. These games have fed my love of words and helped me with my writing skills, so I partake whenever I get the chance. I’m not the best with crosswords; I am much better with cryptograms, and can challenge the best of them.

Last night I discovered another word game on Facebook that I thought was fun. Granted, it was 4 a.m. and in the battle with insomnia, it kept me occupied until I felt drowsy enough give sleep another try. Word Connect has a simple concept. When letters appear on screen, you build various word combinations and earn coins that allow you to continue to play. It’s a great way to keep your brain active and it’s more challenging than you might think.

Player feedback has been positive so far, earning 4.6 out of five stars. Perhaps it won’t be around as long as Scrabble or crosswords and cryptograms, but for now, it’s an entertaining way to spend your time.

Word Connect is a product of Zentertain. It’s available on Facebook, and as an app on Google Play, Android and the iTunes store.

He’s not alone since it is a sentiment shared by many people of his generation, who also believe that life in the 1950’s was simpler and more enjoyable.

I was born in December 1959, so I can’t say I remember life in the 50s, but I do remember the early 60s, which weren’t that different. Traditional roles were the norm, men were the breadwinners of the family and few women worked outside of the home after they married.

Back then we believed our politicians, didn’t question our doctors, and enjoyed a booming economy. There was sense of confidence within the business community that almost any problem could be solved quickly. The government helped boost this confidence by imposing price controls on commonly used goods to slow quickly rising costs. They also passed antitrust regulations to prevent corporate takeovers from strangling competition in the market place. Small businesses were also abundant, including mom and pop stores such as newsstands, candy stores, shoe repair shops, drug stores and food markets. People shopped locally back then, and the small stores thrived.

So, it was a good time for many in this country, but certainly not for everyone, especially those who were discriminated against since the 50s predate the civil rights movement and women’s liberation. Still, my father is correct with his statement, but so am I when I tell my son that nothing compares to the 1970s or 80s. It’s every parent’s prerogative to tell their children that the world was better back when they were young. But I try to remember that even now, at a time when it seems like it couldn’t get any worse, we’re still living in someone’s best time.

If someone uses the term unusual to describe something or someone, I consider it a compliment. I hope the man below sees it that way because that’s what I intended. I mean, who wants to be usual?

July 17, 2017 – Just outside of Trenton, N.J., about 50 minutes from Philadelphia, sits a gem known as Grounds for Sculpture. The 42 acre property is unique art museum that features indoor and outdoor exhibits, a mixture of nature and modern sculpture and 3D characters from classic paintings. Yesterday’s sunny sky and lower humidity provided the perfect weather for a Sunday morning stroll through the grounds.

Grounds for Sculpture is the perfect venue for families looking for a little exercise and something different to do. The grounds change with the seasons, so anytime is perfect for a visit.

Here’s a sneak peak of what to expect if you go: 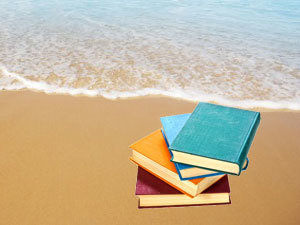 July 10, 2017 – Summer vacation season is in full swing, and whether you’re headed to the beach, the lake or the mountains, there’s nothing better than sitting in the sun and reading a good book.

If you’re looking for suggestions, here is a list of 30 of this summer’s hottest reads.

And if you’re really adventurous, here are the best beach reads of all time according to NPR’s audience.